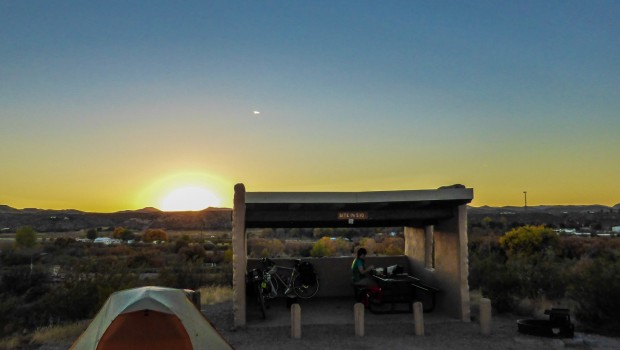 Bicycle touring is a great time to unplug from technology, to immerse yourself in the natural world. However, those tiny, handheld computers we call smartphones are so darn handy! Camera, GPS, journaling device, googler, calculator, you name it. They seem to be too useful to leave behind. Although I remove myself from Facebook as much as possible while I’m touring, I bring along my phone for all those other useful purposes.

Initially when I started touring I would get so frustrated with my cell phone. Even using it only to make journal entries in camp, I would only get two or three days of journaling on a single charge. This was a newish phone, and I wasn’t using it all day, every day. In fact, I was turning it off when I wasn’t using it. Why was the battery not lasting longer? My husband, on the other hand, seemed to have unlimited battery on his phone. We had the same phone. What was the deal?

Well, turns out I was doing it wrong. Once I changed two simple things, my battery lasted longer and my frustration level lowered.

Airplane mode: I thought that turning the phone off when I wasn’t using it would make the battery last longer. Boy was I wrong. Powering down and powering up takes a decent amount of battery power. Who knew? Well, once I started putting my phone into airplane mode, it lasted for longer. Sometimes a whole week.

If you’ve never put your phone into airplane mode, it is simple. Most cell phones have this mode and you can usually access it in the same menu as the power down menu. It should be as simple as selecting “airplane mode”. This keeps the phone on and lets you use the phone, but turns off the part of the phone that searches for a cellular signals. Without doing this your phone will constantly search for a signal unless you tell it not to. Silly phone! Be aware this will prevent you from accessing the internet or making phone calls, but it is pretty quick to turn airplane mode off if you need more from your phone.

Display brightness: Another battery eater is the display. Most phones have a way to turn down the brightness of your display. Once I turned this down to the lowest setting, even though it was now difficult to see what was on the screen, it saved precious battery power.

Essentially, by changing these two settings, you turn your high powered phone into a low power phone. But the camera and non-internet apps will still work if you need them. If you need to make a phone call or check where you are on the map, simply turn airplane off for a couple minutes then turn it back on. So, save your battery. And perhaps your sanity.

Do you have tips for saving your cell phone battery? Tell us in the comments below!