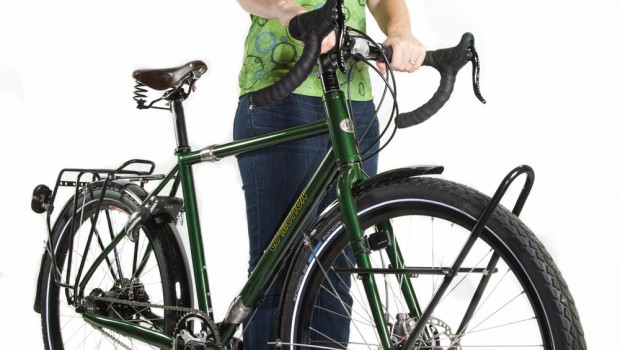 My first touring bicycle came with a Men’s Aged Brooks B17 saddle. Even though not designed for a woman, I quickly (after about 200 miles) became used to the saddle, and continued to ride it for several thousand miles. I even moved it to my second touring bicycle when the time came, as that bicycle came with a foam padded saddle that hurt my butt after about 5 miles of riding, and I never could get used to it. Now, with my third (and probably final) touring bicycle purchased, I had to make a choice. Do I move my B17 to the new bike? Or do I try out a new saddle? Well, I decided to go with a new saddle, and so far I’m not regretting that decision. I continued with Brooks, opting for the Women’s Flyer S. I’ve ridden a couple hundred miles so far (*update-a couple thousand miles, still no regrets), and plan to use the saddle on all tours in the future. 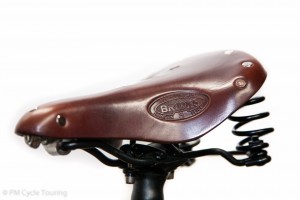 For women the saddle specifically made for you is simply a shorter version than the men’s. Initially I was concerned about this length difference but find that it fits my smaller bicycle well and doesn’t have any negative impact. In all, I’m very pleased with the quality and look of the saddle, as well as the fit and comfort. If you’re in the market for a new saddle, try a Brooks. Take care of it, and it could be the last saddle you ever buy!