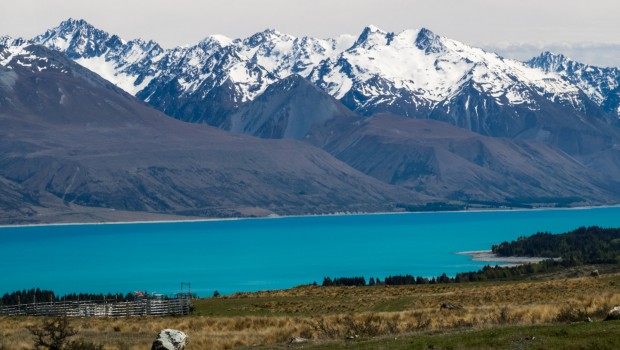 For our first tour outside the United States, we decided to make things easier by traveling somewhere with a common language. We had read about New Zealand’s beauty, the friendliness of its people, and how pleasant a place it is to stay, as well as its claim to speak English.

Upon arrival, we found that even though we spoke the same language, sometimes it didn’t feel that way. Some things still got lost in translation.

For example, for dessert one night, we decided to try a New Zealand milkshake. And not just any kind of milkshake, a “thick shake.” Here in the US, a thick shake is, well, thick, usually requiring a spoon to enjoy it properly.

When our thick shake arrived at the table, we were a little disappointed to find that not only was there no spoon, but it was liquid! It was mainly milk, with flavoring, and a scoop of ice cream. I guess that’s where the “thick” comes from. Ah, well. It tasted good regardless.

Bacon in NZ is not necessarily what Americans would call bacon. I ordered a “bacon burger,” thinking it would be a hamburger with slices of bacon. Nope. It was basically a ham sandwich, on a hamburger bun, not even including a hamburger patty. Slightly disappointing. If you are looking for proper American style bacon, the Kiwis call it “streaky bacon.”

On our last day in NZ, I needed a late afternoon pick-me-up, and we popped into a coffee shop. They advertised “iced” drinks, so I ordered an iced coffee. I expected to get coffee, with ice. Instead, the waitress served me a coffee milk shake, complete with ice cream, milk, and chocolate syrup. It was delicious, and even better than the aforementioned thick shake, just not what I had expected. 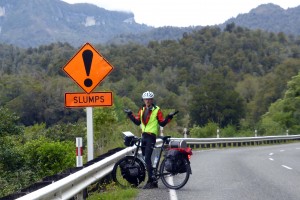 As we rode our bicycles around New Zealand, we were constantly amused at the differences in road sign wording that our two countries use. Over time, we became used to the differences, but every once in a while one would stand out. We actually came across a sign that we still have no idea what it could have meant: A hazard sign (orange with a black exclamation point), and underneath the word “Slumps.” We’re still puzzling over the meaning of that sign. And, sometimes the road signs were polite to the point of ridiculousness. For example, a sign in Christchurch read: Buses and heavy vehicles to use High St one way system as Manchester/Taum intersection not suitable. Seems like a much more polite way to state: Large Vehicles Prohibited.

The longer we were in New Zealand, the more we found ourselves adopting the local words for various activities and things. In a small way, we were able to pick up a little bit of the culture of New Zealand, even in the short time we were there. We had a fantastic time, and look forward to traveling to many more exciting places in the future.

Paying it Back (and Forward) →

One Response to Lost in Translation: Kiwis say it otherwise