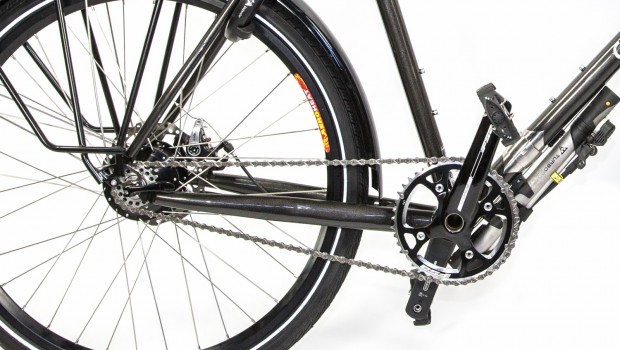 A relatively new concern when selecting your dream touring bike is the drivetrain. If you have decided on an internal gear hub it used to be a very simple choice: all bicycles had chains. However, over the last decade a new competitor has entered the arena: the Gates Belt Drive system. After taking an in-depth look at this new system I wanted to share my results and opinions.

Conventional Chain: This is the tried and true system. A metal chain connects the front cog to the rear cog on the rear wheel driving the bicycle forward. The downsides of a chain are that it requires lubrication, is difficult to keep clean, and can rust. The upsides are the durability, low risk of failures, and availability of replacements.

Gates Carbon Belt Drive: The newcomer to the bicycle industry, this is a carbon fiber belt connecting two special sprockets. At first glance there are some powerful incentives to this system. It is lightweight (~120grams lighter than a chain) and requires no lubrication or maintenance. In fact, if I were getting a commuter bicycle for around town I would really be interested in trying a belt drive. Touring around the world is a different scenario and I found problems with the carbon belt system.

On a tour in remote areas of the world my first concern is the availability of repair parts. If you damage the sprockets or belt there is virtually no possibility that a local bike shop will have repair parts. With that in mind you might starting wondering what it will take to damage a belt.

If you look at the manual for the Belt Drive (available here) there are several different actions which are listed as improper handling of a belt that may cause damage: crimping, twisting, back bending, inverting, zip tying, using as a wrench, mounting with a lever, or mounting by spinning the cranks. If any of those happen to your belt it is considered damaged and needs to be replaced (Page 5-7). While this may not be of much concern to the average rider, what if you wanted to carry a spare? Can you store the spare in your panniers in a fashion that does not violate any of the above? Basically, if any force is applied to the belt other than driving a bicycle it may be damaged.

Further in the manual, on page 34 it describes other scenarios that may damage the belt and require replacement: “… if a stone, a root, or a piece of clothing has been caught in the belt and pulled between the belt and the sprocket.” At this point it is advised that you always replace the belt. So let me think on this a minute. Do I want the drivetrain of my bicycle to require replacement because my pant leg got caught between the sprocket and the belt? Or if a rock drops on to the belt and rides through the sprocket? For a touring bike, no, and I don’t want to be stranded somewhere in the world waiting for a new belt to be shipped to me.

Another concern of mine is that the belt is tensioned much tighter than a bicycle chain. I have seen numbers in the range of 85-100 pounds of force being quoted for the tension. That tension is always there placing stress on the bearings of the drivetrain. Additionally, checking that tension is covered on page 15-19 which requires one of two special tools, or that you apply 20 to 45 Newtons of force (~10lbs) and measure that the belt deflects approximately 10mm. Once again I feel that this may be fine for a normal around town bicycle, but on a tour I would prefer not to be dealing with this.

With all of this in mind I settled on the conventional chain with my Rohloff. It just fits the requirements that I am looking for in a bike and has a proven track record. I look forward to further advances in technology and one day being free of lubricating the chain, but for now touring on a carbon fiber belt doesn’t seem like the most reliable option.

Deciding on my dream touring bike →

Unpacking and putting together a boxed touring bike →