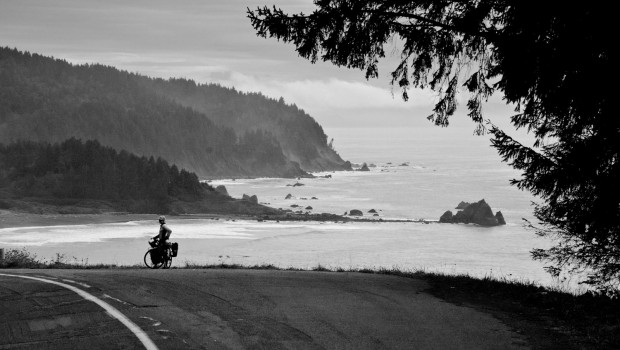 Recently we found ourselves with some spare time after a trip to Monterey, California. Instead of taking the most direct route back home Pam and I decided to take the scenic Highway 1 down the coast. This put us on the prime bicycle touring route in the beginning of June. We thought it would be neat if we grabbed some snacks and drinks for any cycle tourists we encountered on our way home to Los Angeles.

We started off from Monterey and saw no one for miles and miles. In fact, we were beginning to believe that there were not going to be any bicycle tourist on our entire route. But finally we happened upon Jean from Quebec, Canada. We offered him water or snacks to which he politely refused (I never thought a bicycle tourist would refuse free food). However he did share some of his story, and as Pam put it: “He was full of happiness.” Jean and a partner have been going for 30 days straight with no rest days, yet Jean still had a smile on his face and was a blast to chat with.

After Jean we ran in to one more tourist who wasn’t interested in talking to us and a few tourists going northbound which we couldn’t stop to say hi to. We kept on driving down the coast and made it to Lompoc. From our own Pacific touring we knew that from Lompoc to the coast is a challenging ride. About ¾ of the way to the coast we saw a lone tourist battling a headwind and an uphill. We stopped to offer him some water and snacks. Dave graciously accepted and chatted with us.

Dave was also from Canada, but more from the Western side, and was 29 days into his tour, also with no rest days. We were certainly impressed; he was flying down the coast, and seemed to be a having a great time of it. We chatted on the side of the road for a bit and shared a little information on what was coming and where to stay.

Then Dave mentioned that we made his day by stopping and offering him some food and water. That in turn made our day. We had set out hoping to give a few people cheer along the way and had succeeded. Being tourists ourselves we know how much these random acts of kindness mean when you’re touring, and now we were able to pass that on to others.

What did it cost us other than a few moments of time, a bottle of Gatorade, and a few granola bars? Almost nothing, and we made a few people have a better day because of it. So as a thanks to everyone who has supported us on a tour, today we tried to pay it back, or pay it forward for the next adventure we embark upon. Either way, it was a terrific experience.

Bicycle touring without a spare tube →

How to Change a Flat Bike Tire in 12 Easy Steps (With Pictures!) →

2 Responses to Paying it Back (and Forward)