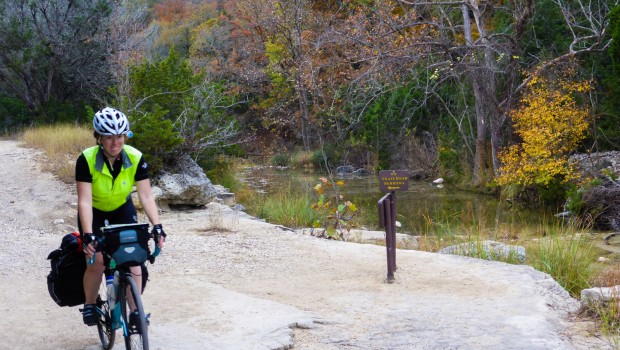 For long distance touring you might think that heavy, steel framed bikes are the only way to go. Not so! I recently completed a 2500 mile bicycle tour on a carbon fiber “light touring” bicycle. I want to share why I chose a carbon fiber bike and my experience riding 2500 miles of the Southern Tier. Let’s take a look at some of the pros and cons:

Weight Limit. Let’s address the cons first. My Jamis Xenith Endura Sport Femme was rated to carry ~40 pounds of gear. Most of the gear I had from previous tours was heavy so I was concerned about putting too much weight on the bike. To address this concern, I purchased new, lighter, more compact gear.

Durability. Additionally I was worried about the durability of carbon fiber. I rode 2500 miles over various road surfaces. This including about 1,000 miles of rough Texas chipseal! If any surface was going to vibrate my bike to pieces it would have been the rough Texas roads, which are some of the roughest surfaces in the United States! I even did a little bit of off-roading, riding on dirt, mud, and gravel.

Repairablility. I was pretty nervous that something would happen to my bicycle along the way. If any damage were to happen to the frame, it would involve a new bike instead of a simple weld like with steel-framed bikes. However, I had no issues in over 2500 miles of loaded touring and the bike is still going strong.

Speed. Now for the pros. My bike weighed in around 17 pounds and my gear weighed 25, my total weight came in just over the unloaded weight of my steel-framed Raleigh Sojourn. By reducing my overall weight, I was able to travel much faster and my average speed went through the roof!

Enjoyable. At the end of the day I wasn’t nearly as tired because I wasn’t pushing as much weight. While I had less space to pack gear, this is also a benefit, because you can’t over pack if you don’t have room. If you sum all of this up I found that with my carbon fiber touring bike, self-supported touring was much more enjoyable. My days felt lighter and easier allowing me to enjoy the views and travel much more.

Some bike manufacturers are experimenting with creating carbon bicycles which are definitely suitable for touring: the rims can take wider tires, the gearing is better suited for climbing hills, the rack mounts are already there. When you’re planning your next tour, don’t discount the carbon. You could find your next favorite touring bike, just watch out for the price tag!