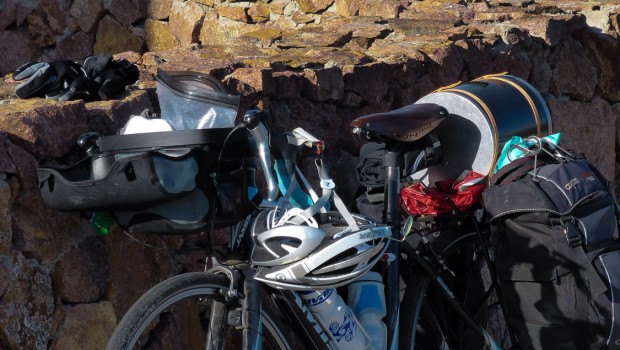 Bicycle touring historically has involved big heavy bikes with big, heavy gear. But carrying all that weight day after day can really wear you down. An alternative is joining the ultralight touring movement. This is gaining in popularity in many sports such as hiking and backpacking, and now cycle touring. The key to ultralight touring is to minimize the weight or your gear as well as have each item serve multiple purposes. Here’s some ideas to get you headed in the ultralight direction.

Panniers. One of the major areas you can save weight is by reducing the number of panniers and racks. Each pannier and weight of the rack adds up. Removing the front rack and front two panniers from Matt’s touring bike removed over 6 pounds! Plus, the fewer panniers you take means less space to carry stuff which forces you to carry less. Considering that most people over pack this will force you to discard unnecessary items. When we tour as a couple we only require two large panniers on each bike.

Camping Gear. Camping gear is also usually easy to target for weight reduction. Modern sleeping bags and tents come in a wide range of weight classes. The only concern is to strike a balance between lightweight and your warmth requirements. For sleeping bags check out some small manufactures like ZPacks. Matt’s 20F down sleeping bag weighs in at just a hair over 1 pound. When selecting a tent going lightweight can easily shed several pounds. Finally that nice memory foam sleeping pad which weighs 10 pounds can easily be replaced by a new inflatable pad measured in grams. Shave ounces, and sometimes pounds, by choosing the right equipment. The weight of the bike is another key place to reduce weight. Steel is the heaviest. Aluminum is intermediate, and carbon fiber is the lightest. While a lot of emphasis is put on the material of the frame, typically the components of the bike and wheels end up adding more to the total weight of the bike than the just the frame. Trimming down the weight of the bike can start off relatively simple, but can get expensive quickly so make sure there aren’t other areas your money can be better spent.

Cooking equipment. As you get into the ultralight mindset, you are going to have to start looking further into your gear list and instead of shedding pounds at a time you will be working on grams. Cooking equipment is a prime place to look at fine tuning your weight. Titanium pots, pans, and stoves are lightweight and durable components which should last for years. There are a lot of backpacking stoves that are measured in grams, with fuel bottles that are much lighter than the heavy Coleman varieties. For eating utensils plastic can be just as light as titanium and much cheaper.

Multiple uses. Another thing to think about is having multiple uses for each piece of equipment you have. For example, instead of bringing a windbreaker, we just brought our rain jackets and used them as windbreakers on and off the bike. Our rain pants added an extra layer for warmth.  Our down vests were used mainly for off-the-bike comfort, but also as an extra layer for on-the-bike warmth. We only brought one extra bowl for meals, using our cooking pot as another bowl.  The Schnozzel Bag acted as a storage sack for the air pads and pillows. Our emergency space blanket had many functions. We used it as a ground cover for our tent as well as a picnic blanket. On our coldest night it covered our tent, keeping us even warmer.

Hopefully this gives you a place to get started with pursuing ultra-lightweight touring. We went from an estimated 75lbs of gear to just 40lb on our most recent tour (Check out our packing list). Remember that every pound of weight that you reduce is a pound you don’t have to carry for the duration of the tour.

To get started don’t feel like you have to change out everything you have. By swapping out a few key pieces of gear you can get started in the ultralight direction. Who knows? You might soon be cutting off tags and weighing each item down to the gram (like Matt did before our last tour). Be careful, it can be addicting and expensive!

Disclaimer:
All opinions about any products mentioned in this article are my own. I have not been compensated in any way by anyone. I will, however, receive a small commission if you choose to purchase the item from Amazon after clicking the link I provide. Use your own discretion.

2 Responses to Ultralight touring: how to reduce your gear weight